Long ago, in the mists of time, visitors to the foundry, if not rare, were few and far between. Any new visitors who did venture in usually left with a lump of wax in their hand. “Have a go” I would say ” Make something you like and I’ll cast it for you”.

It wasn’t generosity or clever marketing. Simply I enjoyed demonstrating the techniques, explaining the qualities of the material I worked with everyday. It seemed a fair and natural thing to do. That’s what you get from an enthusiast. The simple pleasure of playing with a material and the uncontrollable desire to share it with others.

Material is possibility and wax was my material. Wax is versatile and flexible. You can model with it, cast it, fabricate it, carve it, stick things together with it, mould with it. Add materials to it. And then turn it into metal. Or melt it down and start again.

Now visitors come and go everyday and it is more chance if I meet anyone. Business is organised without me now. But those chance meetings aren’t so far removed from those early days. The conversation turns to the process and the materials. And before you know it, I’m running off to get a block of wax and an instruction leaflet. That’s what enthusiasts do. We can’t help it.

Now I can explain the marketing benefits. Our introductory offer. The chance to cast your own bronze. We send out a lot of blocks. How many come back transformed? It’s a numbers game. One major project covers the cost and it has happened. It gets people started. Who knows? You may get hooked and want to cast more. But that is simply the justification, the rationalisation, the excuse. The real reason. I want more people to have a go by making accessible the process I love. To break down walls.

I’ve only seen a few of the free wax bronzes. The wax arrives, goes through the system and the finished bronze is dispatched.
So I make a request. If your free wax sculpture was cast, please send me a picture to castlefineartsfoundry@gmail.com and tell me what you think. I would like to start an online gallery on the foundry website, so your work can inspire others. It’s not about the artistic merits. The bronzes are important because they are your first.

And those who have received your wax and it’s sitting there waiting for you, remember; that little block contains something magical. Sitting in it’s place could be your first bronze. So what are you waiting for? 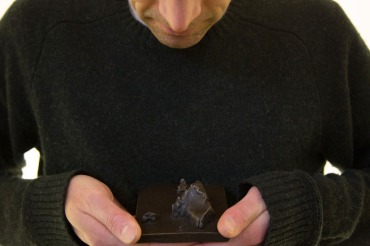 Recently I opened the door to a visitor who had called in to collect something. I found the box that contained his work and handed it to him. Eagerly he opened it and took out the small bronze. He held it up like a prize. A square plate with a few abstract  shapes on its surface. A relief map? A landscape? With a look of joy on his face he showed me his bronze.

This is why I love ‘Free Wax’.

“St Kilda is an isolated and uninhabited archipelago of islands off the north west coast of the Outer Hebrides. Its remote location, spectacular landscape, rich birdlife and fascinating human story has been a recent focus of my artwork, primarily in my preferred medium of painting. www.johnelcock.co.uk

The possibility of working in bronze came about by chance. I happened to see Marianne Heske’s marvellous sculpture ‘The Head’ being shipped out of an innocuous set of doors in Liverpool’s Baltic Triangle district, which in turn led to the discovery of Castle Arts Foundry and the fascinating work being discretely conducted on my doorstep.

The free wax offer was an intriguing incentive to try a new medium, and the arrival of the evocatively scented green casting wax a few days later was the spur to have a go at creating something that could be suitable for my forthcoming show at Corke Gallery in July. www.corkeartgallery.co.uk

Whilst the wax can be carved and moulded directly, the nature of the foundry process results in the destruction of the master model. It seemed likely that I may wish to produce a small edition in the future so I decided to create a plaster mould from which future wax castings could be made.

Having spent the best part of a year looking at St Kilda in photographs, researching its geology and painting its forms often in some detail – the idea to create a scale model of its outlying island of Boreray seemed obvious, with the nice conceit of having the shrink the tallest sea stacs in the UK into a 100mm square piece of clay.

The original model was created in nylon-reinforced Newclay which has excellent stability and was good for fine detail. The plaster mould was created after several careful trial runs, the wax heated and poured on the kitchen stove for the final cast, cooling with primeval lava-like pools in the mould. Packaged carefully and sent to Wales, after a few weeks the piece was ready after and I collected the work from Liverpool with some anticipation.

The end result was really beyond all expectation. Bronze has a unique and captivating lustre, its sheer weight is beguiling and it’s clear as soon as you have it in your hand that you have created something special, something that will (probably) last forever, whatever the relative artistic merits of the piece.

For my part I found the opportunity to create a work in bronze truly inspirational as an artist. For a medium that understandably appears out of reach, Castle Fine Arts have created a mechanism to explore this incredible material, one that is affordable and yet backed by a professional and encouraging team. This is an innovative and richly rewarding pathway to the creation of your first bronze sculpture.”

← THE TRAVELLER RETURNS
“THE SKY IS THE LIMIT” →