‘BLACK SWAN’ LANDS IN THE BALTIC 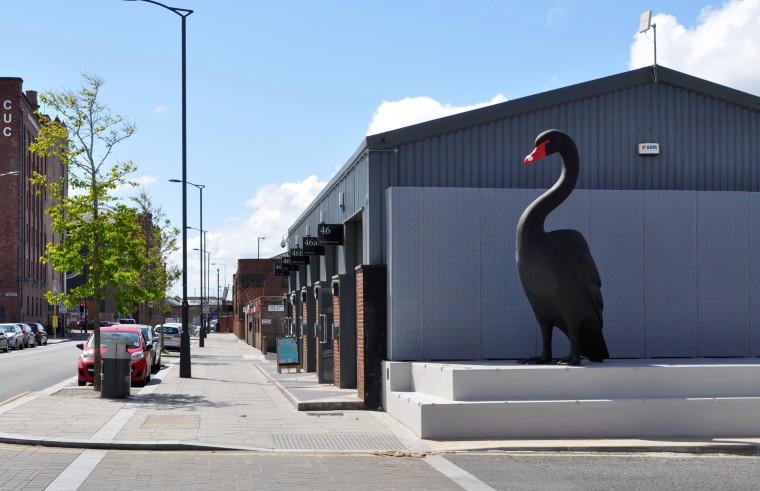 “Black Swan” by Glasgow sculptor Kenny Hunter will be spending the next few months on display in Liverpool’s up and coming Baltic Quarter. From its perch on Jamaica Street Plinth, our giant visitor silently looks down on the busyness of everyday life and the rapidly changing neighbourhood. kenny-hunter

The artist was invited to make Black Swan for Blickachsen, an international sculpture exhibition staged in Bad Homburg, Germany. The show was started by Galerie Scheffel www.galerie-scheffel.de, who show Kenny’s work. When I visited the exhibition I found the Black Swan had endeared itself to the locals. It stood overlooking the park’s ornamental lake, dwarfing the ducks and geese, a giant from another land. A council in a german town bought a copy; we cast the swan in aluminium and painted it black.

Why is Black Swan here? Does there have to be a reason, a logic? It has to do with context. Contemporary art displayed in the white walled gallery or a sculpture park looks like it belongs there. But this is a street corner in an inner city industrial estate. This is a practical place where things have been created, manufactured and repaired for decades. A place to get things done. Now things are changing as the noise of the workshops is replaced by the noise of construction sites. The transformation of regeneration takes hold.

The swan is here because it was made here. Traditionally scaled up to 4m in clay from Kenny’s maquette with a pantograph. Mechanical and time consuming, old fashioned technology.  But flexible enough to leave room for the work to evolve and change. Outdated for the digital age perhaps, but like the industrial estate itself, clinging on. 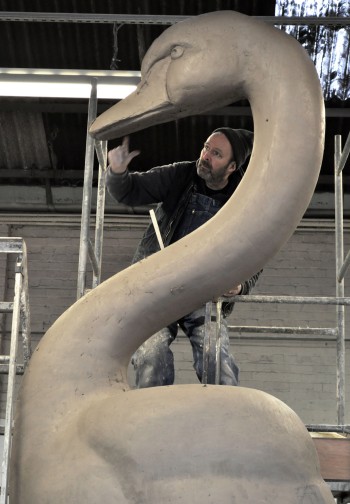 Kenny came down from Glasgow to finish the clay and recalls his time working here. “I really remember initially working with Sean Myhill, enjoying his company and being blown away by the pantograph. A device I had only seen in dusty old library books on the monumental tradition. It was amazing to be working at that scale; when Sean left and I carried on working over the weekend I remember I had a real rush of energy and focus on what I was doing, partly because the workshop was quieter, but mostly because I was so absorbed in the task. I also remember being cold and ill at the time, but still the challenge and thrill of the job was what I remember most.

What does Black Swan mean?  Kenny explains the ideas behind the sculpture.
“For many years now my work has addressed animal consciousness and anthropomorphism. This practice of using animals as symbol is a tradition with ancient roots and most cultures have used it to represent types of human behaviour through art and storytelling.

The Swan has many commonly accepted symbolic associations, including Dreams, Balance and Transformation. The Swan also famously bears messages of Love and Partnership, as pairs are known to bond for a lifetime.

Before the discovery of Australia, the people of Europe were convinced with an unshakable belief that all Swans were white, this was confirmed by all the surrounding evidence. In fact the phrase ‘black swan’ was a common expression in 16th century London as a statement of impossibility. The discovery of Black Swans in 1697 by Dutch Explorer Willem de Vlamingh invalidated this long held belief. This story illustrates the limitations of our learning from observation and the fragility of our knowledge.

This metaphor is now used to describe any event that is unexpected, has extreme impact and after the fact is inappropriately rationalized ‘with the benefit of hindsight’. Taleb believes Black Swan events explain almost everything in our world, from the success of ideas to the dynamics of historical events, fashion and art movements as well as many elements of our personal lives. From the demise of the Soviet Bloc, to the rise of Islamic Fundamentalism, from the effect of the Internet, to the Stock Market Crash of 1987, events like these all follow Black Swan dynamics. In a world of increasingly accelerated change we are all learning to adapt to the impact of the highly improbable.

This simple accessible sculpture will be both at home beside a body of water and surprisingly out of scale within it’s context. It communicates a complex set of ideas and also express an open and graceful, formal sculptural language”. 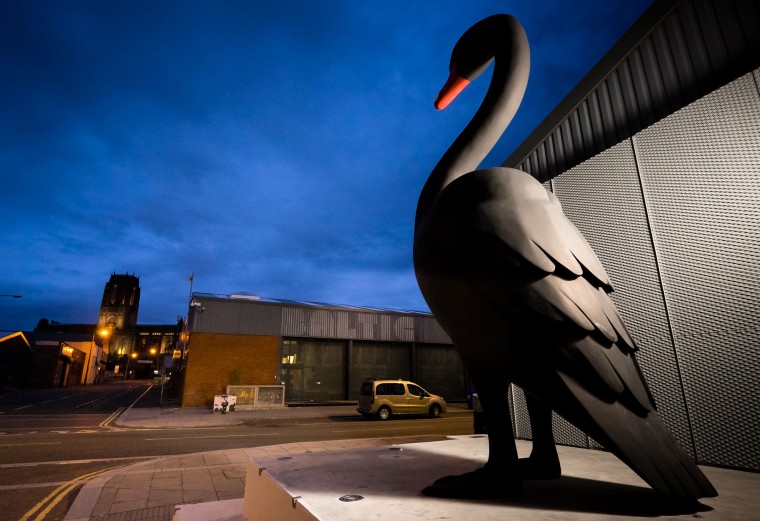 People interpret the work how they will and make their own assumptions.
“Is it a Liver Bird?” is mistakenly uttered from passers by. A quick glance might seem the obvious conclusion in this city, but the Black Swan is not here to rival Liverpool’s famous giant bird. Black Swan has travelled, to Germany and to Scotland where it was part of an exhibition celebrating twenty-five years of Scottish Contemporary Art. Now, like a migratory bird, it’s returned to become the “Baltic Swan”, at least for a while. And the seagulls and pigeons of Jamaica Street look down on this giant bird and carry on their busy lives as normal. To them it is just another place to land.