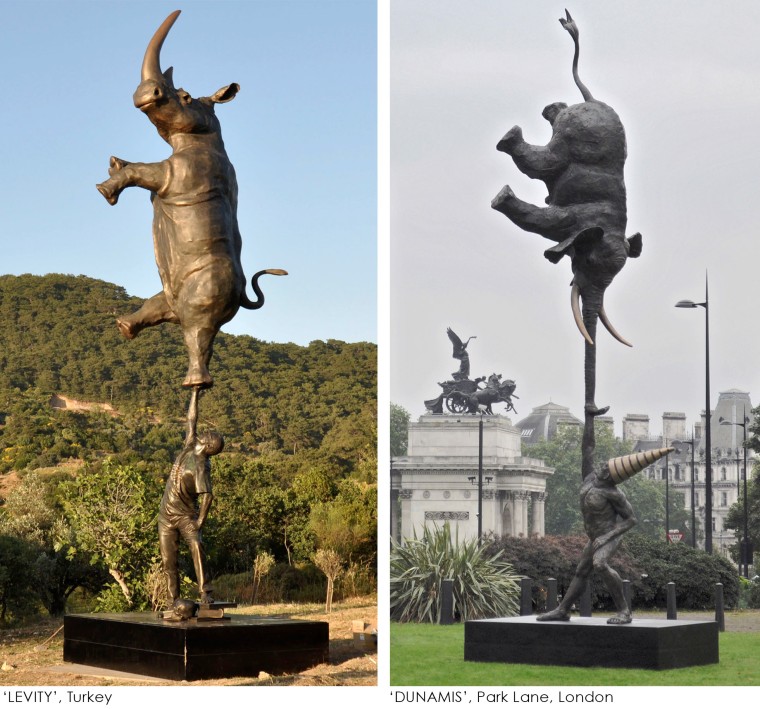 Who knows where the work will take us next … what adventures await?

That’s the fun of it, I remind myself, as we return from a couple of days spent in Turkey installing a monumental sculpture by Bushra Fakhoury, whose work tells tales of magic and myth. www.bfakhoury.com

The installation was indeed fun, though not always funny. I’d sent pictures, dimensions and weights, resulting in an event on the scale of a small military operation, but without the time wasted on any serious planning. Not exactly spontaneous but approached in a spirit of flexibility. In other words the installation unfolded with each obstacle cooly dealt with as it arose.

I was there with the artist to keep an eye on things which mainly consisted of protecting the work by trying to curb the enthusiasm of the local team. Despite one or two minor hitches and sudden tactical shifts they pulled it off impressively.

“Levity” now stands, among the olive groves and cypress trees, imposing but hidden away from public view, on a private estate in the mountains, overlooking the Aegean Sea.

A magnificent sunset is framed by the window of the plane as the islands stretch out below me. The very islands where ancient poets created the  myths. What would the builders of modern civilisation have made of our magic ship, flying through the heavens carrying its cargo of sun burnt holidaymakers? I’ve caught some sun too, but I am not a tourist. I like to travel with a different purpose. The sculptures have taken me around the world and now, above the clouds, I ponder on the first part of the adventure that brought us here.

In far away London, in the heart of the metropolis, lies another island.  On Achilles Way, surrounded by concrete jungle and protected by an endless sea of flowing traffic, stands the impossible for all to see.

A man or perhaps a god, holds aloft an elephant by its trunk. Eight meters tall, the sculpture is big enough and strange enough to catch the eye from a passing bus as it heads down Park Lane. Or spotted from the safety of the park by anyone still surprised by such things. If you are little more curious or adventurous you can take your life in your hands, dodge four lanes of thunderous traffic and make it to the island for a closer look. Or take the more epic but safer journey via subway, through an underground car park, down blind alleys and finally up a steep ramp to re-emerge unexpectedly into the daylight. 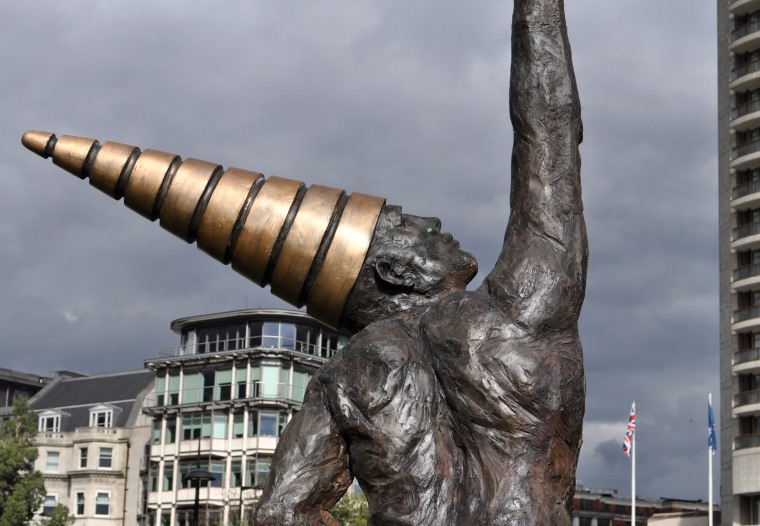 Safely there you will find our island strangely tranquil. Okay there’s the traffic, the wailing sirens, the flow of tourists but they are just far enough removed to give you a sense of solitude. I’ve spent time on the island doing maintenance work or just visiting and hardly a soul has ventured while I was there.

Explore a little further and you will find the island inhabited by another lover of myth. A bronze statue of Lord Byron, romantic poet, who wrote of his hero Achilles and became hero of Greece himself, looks out across the ocean of traffic. The restructuring of the road in some distant time has cut the poet off from the world, set adrift from his former home in Hyde Park. Now progress has left him with only his faithful dog for company. And the odd visitor.

“Dunamis” was an personal adventure for Bushra. Heroic. (www.youtube.com) She took a chance and through determination a dream came true. One day the sculpture caught the imagination of the client as he past Achilles Way and Bushra was rewarded with a commission to design a version for him. 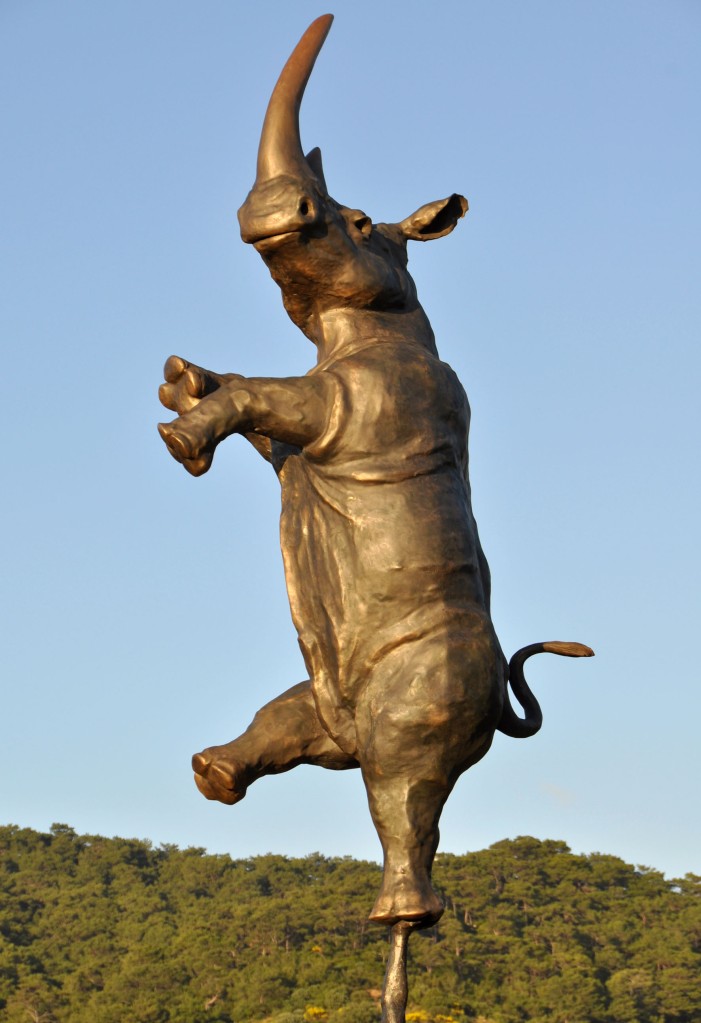 Safely installed in the kingdom of Troy, well close too, we enjoyed our victory dinner in a beachside restaurant in Bodrum. We raised a glass to “Levity” and declared the “International Day of the Rhino”. Tired, relieved and happy, I asked Bushra if she’d had a good trip. Her smile answered my question, but her words said it all:

“Where are we going next?”, she replied.

← EVERY PICTURE TELLS A STORY
‘BLACK SWAN’ LANDS IN THE BALTIC →